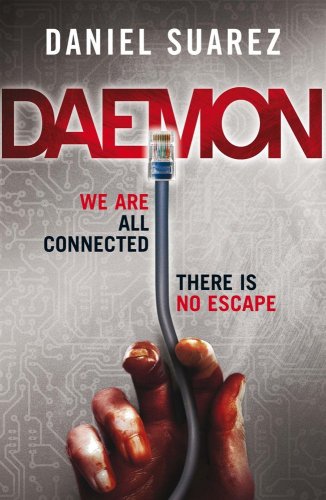 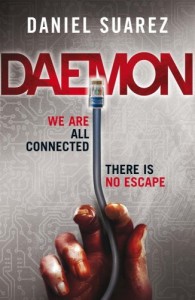 I’m not in the business of recommending fiction. Don’t get me wrong, love having myself some chewey plot before bed-time, but by and large — those creative works that are related to our purposes I leave you to find on your own. But then this book came along, and I just can’t stop blabbing about it. Especially relevant to current world affairs, I think everyone should take the time to read this book.

In Daemon and the second-part sequel, Freedom, Suarez takes you into a hypothetical world where a self-replicating computer program has taken the world by the short and curlies. Now here is the thing: While a couple things were wrong-ish, the guy knows his stuff — he’s was an IT consultant in another life. And, he does a good job of both explaining the tech and keeping it behind the scenes, so you’re not snoring for the page-after-page nuances of TCP/IP. Further, he knows his shit in more ways that one, including the true weak points of the global economy, current cognitive science, and on and on.

Most shockingly, the guy knows the powers-that-be: Who they are AND how they think. Trust me.

If I were the ones pulling the strings behind the United States, I’d be flipping my shit that someone put me out there all naked and what not.

He blends all this insight together to give you a shocking look at the world as it really is and a preview of where it is going.

A look we all need to take.

The writing isn’t “War and Peace” caliber. But, it makes up for it in a ratcheted up thriller-plot, reminiscent of the way Dan Brown has you flipping pages until your alarm clock goes off in the wee hours and you realise you have to take a shower and go to work. And speaking of your clock-punch, that is the real beauty of this work.

You see, most of us are just cogs in a machine at this point. A machine whose sole purpose is to extract our value and lay it at the feet of someone else. And, a lot of people have that figured out, which is good, but then it turns bad because they get lazy and don’t think things through. They busy themselves with trying to extract themselves from that cage, not realising that the cage itself is obsolete. That’s the old model. Those at the wheel have an entirely new destination in mind.

The truth is, we are headed for Technocracy. For us standing apes, if we don’t wipe ourselves out — this is as inevitable as tomorrow’s sunrise. The only question that stands before us is wether that Technocracy will serve the Oligarchy or the Human Race, generally. As I am not part of the Oligarchy formal, I’d prefer the latter. Since I believe I reincarnate, I double prefer the latter.

Critically, this is where those who kick back and say, “Well, I’ll just ignore it and adapt around it”, or “If I submit it won’t be so bad, I don’t need to rule, just reign.” are so wrong it hurts me in the ball-sack. You’re still thinking according to the old model. Back in the day, your labor was needed to get shit done, so the elite managed you and harvested you like cattle.

Automation is on the horizon. They don’t even need 1/10th of the 7 billion inhabitants of the planet to get shit done as they need it done. Not even close. Their wealth isn’t even predicated upon your participation in the markets anymore. Force is cheaper. They have competed, the winners are decided, and they’re ready to move on.

The gut-dropping truth: You are vestigal. Like an appendix — a relic of a more primitive step along the path of evolution.

To their mind, your services are no longer required. All you do is consume resources and provide excess output that is not needed.

Now are you seeing their big picture? Their problem is, they want to shed you like dead-skin, but don’t want to wipe themselves out in the process. Civilization is headed for a demolition. They know it, you know it, we all know it. To their deepest bones, they want to control that demolition, and all they care about is that they remain on top.

Deep down, we all kinda sense it. It is where that residual anxiety keeps coming from. And, we’re trying to solve it. We know the system is broken, and we sit around yapping at each other, trying to figure out where the wrong turn got made. Trying to find a real, lasting solution — it’s like chess with no good moves. Capitalism blows. Socialism sucks. Armed revolt seems dicey. Peaceful resistence under controlled media turns up short. Appeals to the system fall on deaf ears. Local initiatives make progress but are shut down when they become a success.

That’s the thing about this book. Suarez looks at it all and offers us a solution. A way out and up.

If, that is, we are brave enough to punch the keys.

Direct, true Democracy. We’ve never really had it. Now, we have the technology.

Give it a read. You won’t regret it.