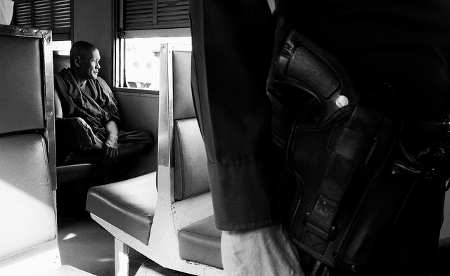 Often, people come to me with a chain of “failures” under their belt. People pick a problem area of their life, make some effort to change, and slide back down into old habits. Then, they pick a new area, repeating the same pattern. Over and over they will do this effectively going in circles. Wash, rinse, repeat. Sadly, some mistake this circling for forward momentum, blissfully unaware of the waste of their energies.

This yo-yoing or “rubber-banding” is a common stage of development that we all must pass through. However, sometimes people get stuck here. They keep thrashing for quite some time, eventually giving up in a deeper sense, and copping out under, “these bad things I don’t actually want are just who I am.” Hiding under a false blanket of self-acceptance they mistake for self-love, they can go to the grave proud of ultimately going nowhere.

From the perspective of the Path, this is akin to watching someone who doesn’t know how to swim eventually become still and sink beneath the water.

Usually, with a smile.

Does this describe you? I have your life-raft.

Don’t reach. You’re in quicksand. I will bring it to you…

Externally, when we observe this pattern in ourselves and others (and, it can happen in any area, all on its own) — we can make the obvious statement that the problem is a lack of focus and consistency. Amateurs might credit this with a lack of “will” or “follow-through” on their part, but this is incorrect. The person is in fact using will to drive their attempts and that is the problem. Will is the nitrous in the engines of our Descent. It pushes us past barriers or gets us a needed boost of momentum, but it is a limited resource. Being unsustainable, it eventually fades and must be recharged, giving rise to the pattern we see in their efforts. The truth is, when we are talking sustained change, the long-term driver is not will, but detachment.

It is our ability to “give up” what is inconguent with our desired directions — be it losing weight, finishing a novel, or finding the courage to give a speech — that determines our success. Not our will. Everyone can get up and work out the first time. Now, I salute those first attempts, as few people find the will to make them. But, the reality is, only the person who has trained detachment can pick a nice, easy gradient, and keep the routine going until the goal is reached. This, detachment, is our ability to tell ourselves “no”, without it costing us willpower, and it is probably the most deterministic trait of the succesfull.

It is yet another paradox of the Path: Want what you want fully, and detach to have it.

But, how do we do that? If one is using will to say no, how can we “wean ourselves off of will” to somehow strengthen the no-muscle?

After all, that is the reason this problem is hard for the individual, going through life in first-person perspective, to address. It is the riddle that makes this a quagmire. Often, they can see that the below-decks of their ship are rotted, even if the sails are pretty. But, if the tools they use are a needle and thread — good luck fixing that. Not understanding that there is a bucket available to them, they rationalize the cause of their problem in another direction. Worst case, they chalk up repeated failure to “not being like those special people.”

Just like with the bucket below the decks, you can’t pick one flooded area and just get the water out of that section. You gave to go balls-deep on the whole thing, training this skill generally, until you achieve the net-effect.

So, what’s the bucket?

The answer: Meditation. Specifically, mindfulness meditation. I will put some resources for you at the end of the article.

If the Path has a panacea, an amoxicillin, something that shotgun just works across the board and slays everything with enough of it applied, this would be it.

Here’s the deal. We have presented that you are a God, in fact “the” God — but in a weakened, delapidated state. Inside of you is all the power of your force, but without a solid foundation, that force will only carry you so far. It’s like trying to punch with no core strength, but ripped arms. Without the “torque”, the arms are capped in what they can generate for you. Most people try to solve this issue by barreling in and building arms that are even more hulk-like, psychologically speaking — by heaping up more and more will. Alone, this never works. I hope this is becoming clear.

There is, ultimately, this illusion of you that you still identify with — and I’m not talking about your desires or your personality. Rather, what I am talking about is far more subtle, it is your “driver’s seat”. The idea is that you are this isolated thing, sitting behind your eyes looking out at the world. With will, you are pushing and shaping like a giant, unending game of Minecraft, to make things happen.

Nothing could be further from the truth, but ultimately, I can’t show this to you. You can only show yourself. What I can tell you is: Who is observing what? This is the question I ask myself when I begin each session. In other words, when you have these thoughts and push this will, who or what is watching the thing that sits behind your eyes and does that? If the thing sitting in the “driver’s seat” can’t be watching itself, what is? That, my friends, is the point of mindfullness meditation — seeing into that question. What happens is that slowly, over time, the “observer” you find, the thing watching the thing you think is you, starts to get more and more of the reigns in your awareness.

This shift, is what is training the “no-muscle”. As the detachment grows, it takes less will and gives more ability to let the temptation drop. This observer is the ignored and shunned “real you” that sits above everything in your external circumstances. Make friends with it, and the rewards are manifold. This process takes time, understand that going into it. And, be aware that things don’t “change” in a direct sense. You will still use will when called for and temptations to backslide will still produce urges. But your relationship to both of those things changes, under the detachment shift. You go from “thrashing re-actor” to “driving actor” on the cosmic stage. With a rebuilt foundation under your mind, goals unlock like clockwork.

Now, there are a few things people do which are inherently wrong, that tend to short-circuit the process and lead them to declare the whole thing is crap. Don’t do these:

With that, I leave you in two sets of competent hands to get you started. Happy hunting. And, keep in mind — if you want the results that everyone else is getting, just keep doing what they are doing. But, if you decide that you’d like something better, come on over and do what the professionals are throwing down into their daily routing. Grab a sit, count some breaths, and start taking over your world.